Love and Marriage: Should You Date Before Saying I Do?

The question of whether you should date someone before you get married seems like it should be a fairly easy question to answer. I mean, is that even a thing? Marriage is a big deal. Why would you ever marry someone without dating them first?

As a parent of two young adult children who are nearing the age I was when I got married, my response to “Should you date before saying ‘I do?'” would be a quick and resounding, “Yes!”

In fact, I can say with 100% certainty that if either of them came to me and said they were engaged to a person they’d been “seeing” but not actually dating (meaning a committed boyfriend/girlfriend type relationship), I would be counseling them to back that bus up! With my mom hat on, several parental points of wisdom spring to mind, but I think I can safely say I’d start with this:

Marriage is a big step. Maybe you should spend time seriously dating one another before you make such a big decision.

What's Included hide
The Odds Were Stacked Against Us
Cheers to 27 Years!
Marriage Before Dating | a Non-Traditional Path
Taking Chances
Top 5 Ways My Husband Shows Me Godly Love in Marriage:

The Odds Were Stacked Against Us

Yet 27 years ago, Doug and I did the exact opposite of what seems a traditional path to the altar. When we said our “I dos,” we did so without first dating. To add to that, in the six years leading up to our wedding, which included a nine-month engagement, we had not lived within 190 miles of one another!

It’s really kind of crazy when I think about it. However, when I reflect on the series of events that led us to “I do,” I can’t help but recognize the gift of praying parents and God’s hand in it all. (You can read, God at Work in the Wandering, for more about that.)

So in honor of the man I married, here’s our story:

Let’s start with a fun fact: Doug’s mom was my 7th grade Sunday School teacher. Although we did not go to school together, Doug and I grew up in the same church and became friends in youth group. Friends…nothing more.

He went to Southern Methodist University for his undergraduate, and a year later, I left for Texas A&M University to do the same. For the next five years, our paths crossed occasionally when we both were back home during breaks, but that’s about it. However, in 1992, things took a turn.

Doug was completing a master’s program through Texas A&M, and while he was in town that spring lining up a place to live, we had dinner. Of course, as he was preparing to move to College Station, I was preparing to leave following my upcoming graduation. I didn’t have a job lined up, so I volunteered as a counselor at our church’s youth camp for a week in June. Doug came to visit, and from there, it was a seven-month journey toward a future I’m fairly certain neither of us saw coming.

From the summer of ’92 through Christmas of that same year, we saw each other either when he came home or when I went to visit friends in College Station. We wrote letters back and forth (that’s what people did back then), made occasional (because they were expensive!) long-distance phone calls, and went dancing when we had the chance. Another little fun fact: Doug taught me how to two-step when we were in high school. Overall, we just enjoyed being together.

Marriage Before Dating | a Non-Traditional Path

By that fall, it was clear we liked each other more than “just friends,” but here was the big hurdle. Doug was graduating in December and then moving to Kentucky. So while sustaining a three-hour long-distance relationship seems easy enough, it didn’t seem likely that a young romance could develop over a distance of 900 miles, particularly in the pre-connectivity, -FaceTime, -free long-distance calling days of the early ’90s. If you lived it, you know!

So we really didn’t discuss the future; I guess just figuring we would cross that bridge when we got there.

Christmas night, Doug came to my house to say goodbye. He was leaving the next morning at 5 am to drive to Kentucky and begin his new job. We sat in his car in front of my house for a long time going back and forth on his staying and/or my moving, but we couldn’t find a scenario that made sense.

He was my “one.” I knew it that fall, but I couldn’t see past the impossibility of a long-distance relationship. Thankfully, he saw something different, and in two short sentences, we sealed our future.

And without hesitation, I said, “In a heartbeat.”

There was no photographer lurking in the shadows or family and friends waiting to celebrate. There wasn’t even a ring!

We mostly kept that conversation to ourselves and made plans for me to visit in January. I went back inside my house thinking, “So I think I’m engaged.”

Of course, a ring did follow, and we announced our engagement in February. The rest, I guess you could say, is history.

When I consider our story through human eyes, it’s a wonder we made it. Marriage is a big deal, and we just jumped right in. But the truth is that God was in the details from the start. He brought us together, and He continues to sustain us.

I love the life we’ve built together. I love him more deeply today than I could have imagined was possible when I was just 24 years old. He’s not perfect, and I’m not perfect, but we’re perfect for one another.

So while a “27 reasons why list” would have made a perfect complement to this post, that feels a bit long. Instead, I’ll share with you my top 5!

Top 5 Ways My Husband Shows Me Godly Love in Marriage:

It hasn’t always been easy, but it’s always been worth it. God joined us together, and we won’t be moved (Mark 10:9).

Be sure also to read: 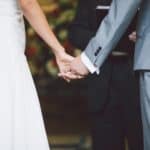 What’s the Key to Making a Marriage Last? 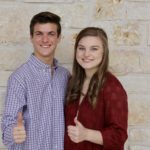 Home for the Holidays: Navigating Your College Kid’s Return 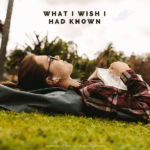 Parenting College Students: What I Wish I Would Have Known

marriage
Book Review: The Greater Work by Jim Denison
Parenting College Students: What I Wish I Would Have Known

1 thought on “Love and Marriage: Should You Date Before Saying I Do?”